Sri Maha Pratyangira Devi was created from the third eye of Lord Shiva. She is believed to be the combined power of Lord Shiva, Lord Vishnu and Goddess Shakti and is also sometimes referred with the name Goddess Bhadrakali.
She is also known as Narasimhika (in Kalisahasranama Stotram), “She who is the Ferocious Half Human Half Lion of Courage”. The description states that when Narashimhika shakes her “Lion Mane”, she throws the stars into disarray. She is enveloped as bliss in the Beeja Akshar (Seed-letter), “Ksham”. In the ‘khila kandam’ of Rig Veda scriptures, a suktam named Pratyangira suktam finds mention.

Many texts like Meru Tantra and Matra Mahodadhi talk about Pratyangira Devi. Sri Pratyangira Devi is also associated with Sri Chakra. She protects the followers against all difficulties and guides him/her along the right path. 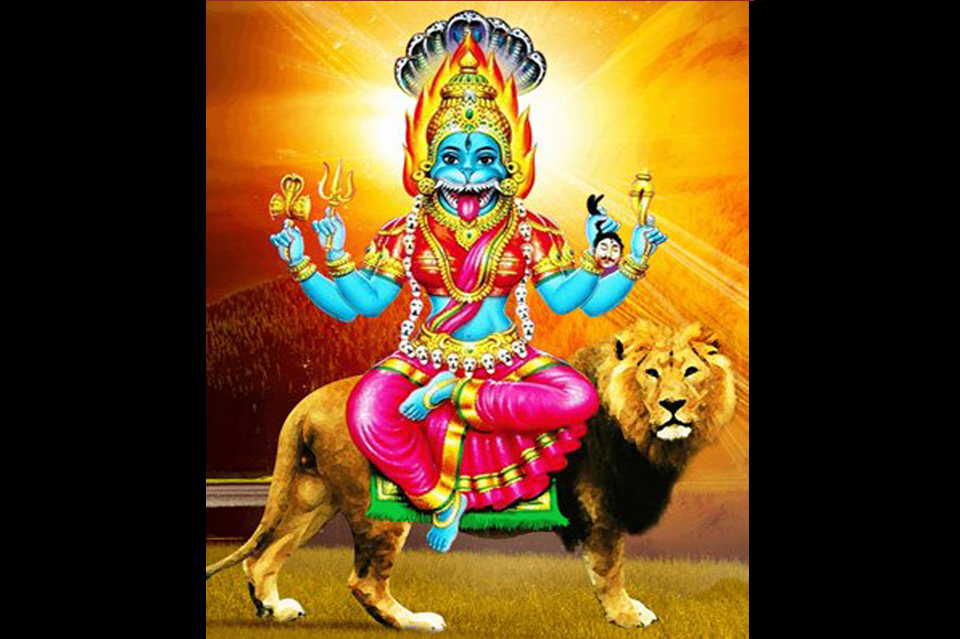 The Goddess is depicted to have a face of a lion and a body of female human being. Pratyangira Devi is also known by the name Narashimhi. Pratyangira, Shulini, Siddhakubjika, Raktakali, Aghora, Vatuka, Bhairava, Sharabheshwara, Narasimha, and Sudarshana are the some of the very fierce kinds of Homas performed seeking protection from enemies and evil eyes and negative forces. Pratyangira is considered a Teevra Murthy (A very fierce goddess). Puja of Pratyangira is strictly prohibited for common people. Pratyangira Puja is only done under the guidance of experts proficient in Tantra.
Pratyangira homa or Havan spreads positive vibrations around and helps get rid of enemies, evil eye and black magic. Pratyangira Homa is performed when you are being surrounded by negative energy and considered to be a very Ugra Homa.
Pratyangira Devi is invoked by performing Pratyagira Devi Homa or Havan, Japa and Yajjna to seek protection and her benevolence. A lemon is kept at the feet of Pratyangira Devi image during the Homa. This lemon charged and blessed with the power of the Goddess is given to the devotee for protection. This is also said to attract wealth and prosperity.

Who should perform Pratyangira Homam?

Pratyangira Homam or Prtyangira Havan is a powerful Prayogam performed along with a Puja and Mantra Japa. The Puja is performed by those who want relief and protection from negativities, black magic, witchcraft, misfortunes, diseases and all kinds of negative influences.

Performing the Pratyangira Devi Homa and Mantra Japa has many benefits: